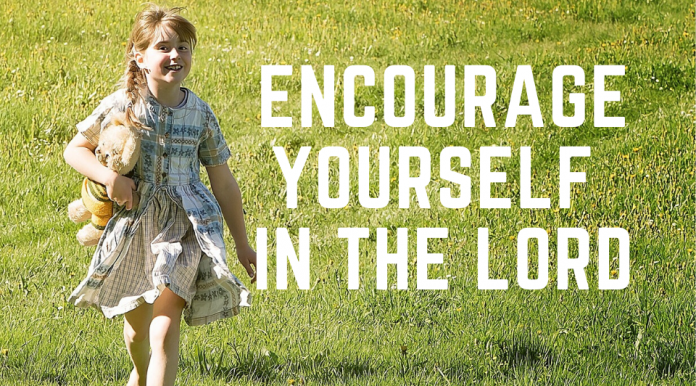 David was greatly distressed; for the people spoke of stoning him, because the soul of all the people was grieved, every man for his sons and for his daughters: but David strengthened himself in the LORD his God. 1 Samuel 30:6 (NHEB)

Were there times when you feel like the world is caving in on you? We all do. But note that you are not alone. In the Bible, David experienced the same feeling, and maybe even worse than what you are going through. In 1 Samuel 30:6, David was greatly distressed.  Other translations described David as desperate, upset, afflicted, in great trouble, and in an extremely difficult position, yet David took the initiative and encouraged himself in the Lord.  How did he do that? What did he do?

If you continue to read 1 Samuel 30:7-31, you will notice that David did not just sit there and have a pity party.  Instead he rose up and said to Abiathar the priest, the son of Ahimelech, “Please bring me here the ephod.” Abiathar brought the ephod to David. David inquired of the LORD, saying, “If I pursue after this troop, shall I overtake them?” He answered him, “Pursue; for you shall surely overtake them, and shall without fail recover all.”

David took action. He inquired of the Lord, which was the very first and the most important thing he did.  Then he obeyed the Lord and did exactly what the Lord instructed him to do.

So what are some things that you can learn from 1 Samuel 30?

2. Seek the Lord, which is taking action.

I know I will try to follow the tips that I posted here when I am going through some stuff in my life.

How to Handle Disappoinment

Wait for the Lord

Do Not be Weary in Doing Good